Welcome to the exciting conclusion of Purim 2011.

1. A joke from Sam. More like a practical joke. The day of Sam's school Purim Carnival, he was SO excited. He was up before 6am excited. Luckily he is old enough that I can say, "Sam, if your wide awake, please go read or play in the living room." He was in his costume by 6:30. Some time in the next half hour he comes to me, and says, "Oh no! We messed up the costume!" I was about to calmly explain that it's simply too late to do anything about it, when he showed me this picture: 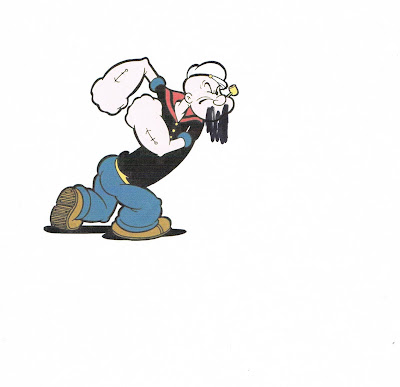 And he said, "we forgot the beard." Touche, young Jedi, touche.

2. Mishloach Manot (really I posted the tags already, but here they are on the day itself: 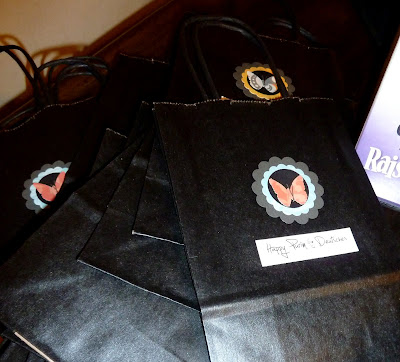 3. And finally, the shocking secret: Every year, after our major Mishloach Manot deliveries, I go home with the kids. By then we are tired, often cold, and there is a huge mess to be cleaned, and a pile of candy to be eaten. At that point, Dave goes out for a few more deliveries, which I always thought was just to some guys from Shul. This year I joined him, while Max and Sam went home to devour candy without us. Turns out, Dave also delivers some Mishloach Manot to some of the local shopkeepers as well: The shoemaker, the pickle guy, and the picture store guy. Not only does he bring them a little package, but he shares a drink with them as well. (That part might not be totally altruistic). I knew Dave was nice, I knew he likes our neighborhood shops, and I definitely knew he likes to drink (it's a Mitzvah), but I did not quite know about all the holiday cheer he was spreading. 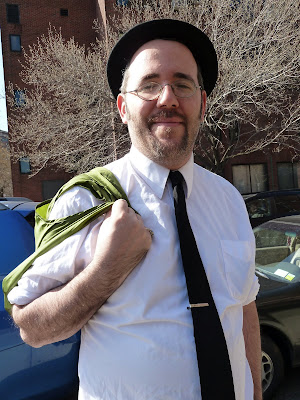 I guess I'll keep him after all.

And, one more time, just because he's cute: 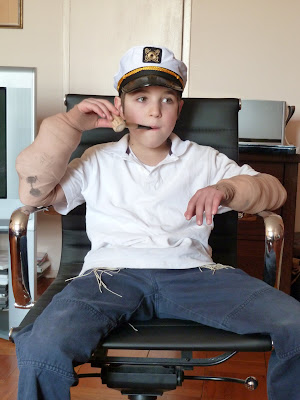 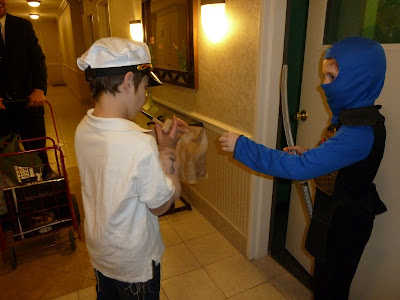 It's hard to know when these will get scrapped (last year's got done in January), but for now Purim 2011 will be recorded here in all it's glory. When I do get around to scrapping these, I might just follow the design I used for 2010. It's not beautiful, but it's not ugly, it has LOTS of photos, and it tells lots of story: From the Purim carnival in the weeks before Purim, choosing costumes, baking, and Mishloach Manot. 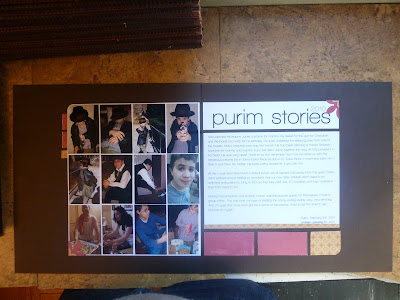 Sam started planning his Purim costume weeks in advance. He wanted to be Popeye. Not one to skimp on any details, and armed with parents who can't say no to a young boy trying to fulfill his artistic vision, Sam and Dave ordered a corn cob pipe (I had no idea either), and a sailor hat. Dave had some plans to use pantyhose for the Popeye arms, but the exact details needed to be worked out. Enter Mommy (that's me), who wrapped pajama pants around Sam's forearms (for bulk), wrapped the pj's in ace bandages (to keep them in place, and to create the skin tone), covered them in pantyhose (Dave was right), upon which I drew Popeye's tattoo, and voila. And to make sure it was all accurate, Sam printed up this picture to use as a reference: 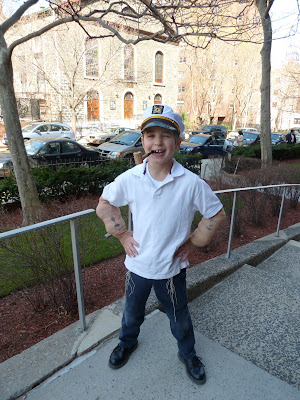 He wore this on Purim Day, his school Purim Carnival (at which he won most convincing costume), and the Lower East Side Purim Carnival.

Now Max was another story altogether. He is 12, and did not show much interest in dressing up. Dave and I sighed, and said, "Well, I guess he's really getting older." At some point he did mumble something about dressing up with some friends, but he didn't really follow up with any details, so I dismissed it. Purim morning, he says, " I need a pants that I can cut up! And a t-shirt. And I'm meeting my friends by 11:00!" It also turned out that he was planning on delivering some of our family Mishloach Manot as well. Which was nice and convenient, but that would have been helpful information to have a little earlier. I was still printing up little labels to tell everyone that our home made hamantashen were dairy (because everything tastes better with butter), when he absolutely had to leave, so the only photos I could get look like this: 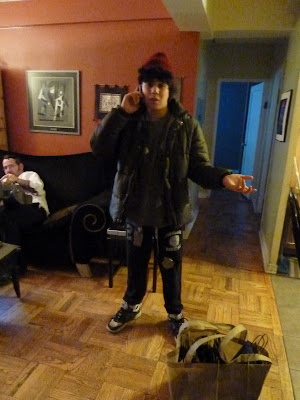 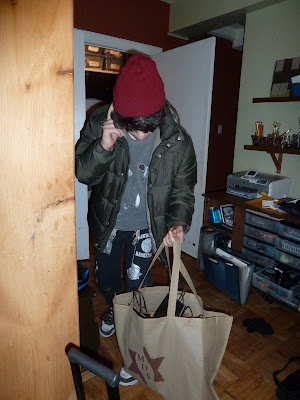 But I think the fact that I got super sub par photos of my almost teenage son, as he ran off to deliver Mishloach Manot with his friends (who, BTW, were dressed as hobos), tells a story of its own; namely that Max is really getting older. And as Dave, Sam, and I went around town delivering the rest of our packages, Sam said, "It's weird that Max isn't here." Which isn't bad. Just different.

I think I'll end here for now, but, guess what? I am not even done yet. Coming tomorrow...A joke from Sam, a quick peek at my Mishloach Manot, AND I discover a surprising secret about my husband! Cue suspenseful music.
Posted by Aliza at 10:03 PM No comments:

It's been a crazy 2 weeks: First my husband's family visiting, Purim, my family visiting, my nephew's Bar Mitzvah (!), and in between all that 5 scrapbook layouts due.
Three of those layouts were for this: 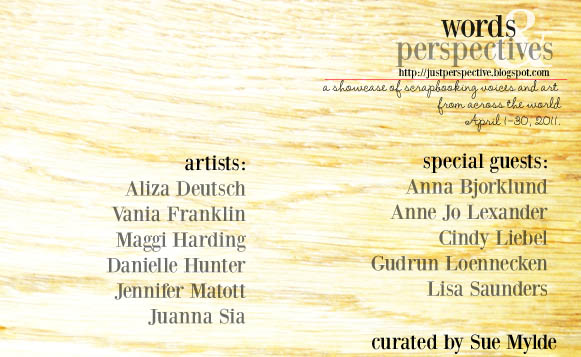 I'm super excited (like, totally) to be a part of this, and I can't wait to see what the other women have created. I have to say, it brings a smile to my face to be listed under the word "artist." It took a few years before I called my work, "art," and I still don't think I would call myself an "artist," but if someone else wants to, well, I won't stop 'em.

I also made this for the Sketchy Saturday Challenge at Simply Scrapping Crafts: 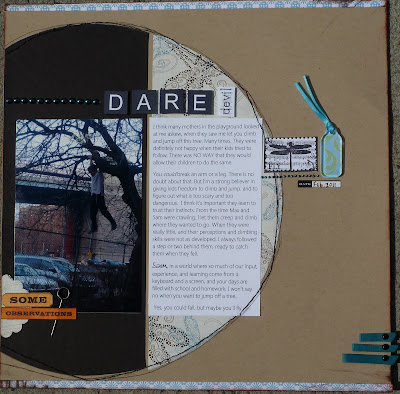 When I finished this layout, I said to Dave, "I like the way it came out, and I'm pleased with myself because this sketch was challenging for me." And he said, "Because it's a circle?" Yes, because it's a circle. What can I say? I like my lines straight.

Coming up soon: Pre-scrapped Purim Pictures
Posted by Aliza at 10:19 PM No comments:

This sketch challenge is posted on Simply Scrapping Crafts, which is a great community of crafters, with card and sketch challenges, amongst other things. It's a wonderful place to "meet" other crafters, and gain inspiration.
Here's the sketch:

And here's my take: 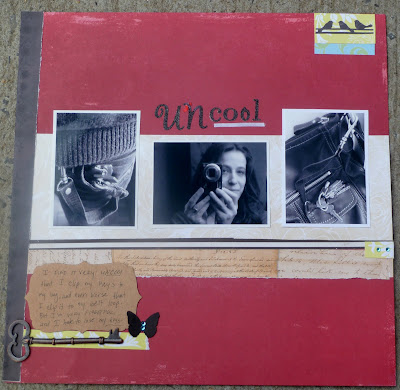 I do not usually work with bright pink, but the black and white photos made it possible for me. I finally got to use one of these nifty keys. They are pretty cool. Sam loves 'em too. Little metal tchotchkes are right up his alley. The problem is, they are right up mine too. So, we have to share sometimes.

Back to celebrating Purim. So much to scrap when this holiday is done. Max delivered Michloach Manot with his friends, Max and Sam each made their own Mishloach Manot for their friends, Sam won a costume contest at school, and I didn't know that Dave delivers Mishloach Manot to store keepers in our neighborhood. And even has a l'chaim with them. This year I went with him on his outing.The question will be, do I make separate layouts for each person, or one big "Purim Stories, 2011?" We'll see...

Before I get to scrap Purim though, I have one more big scrapbooking project that has to be done this week. I'll share more about that once it's all public...
Posted by Aliza at 4:15 PM 2 comments:

What Deutsches Do in their Spare Time, And...

What do we do in our spare time? Well, we watch a lot of TV. I won't lie about that. Max reads, and Sam pretends to fight a lot of bad guys. I scrapbook. On Shabbos we play games. And sometimes, some of us write comic strips together. Well, just this one time. Max made one first, and the first thing he said was, "Don't scrapbbok this!" So blogging about it is definitely out.
Then Sam and Dave worked together to create this: 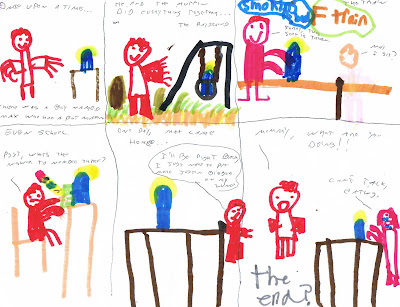 I think they have a great potential, as long as we can hook them up with a different letterer. Perhaps I can help:
Panel 1:
Once upon a time...There was a boy named Max who had a pet muffin.
Panel 2:
He and the muffin did everything together.
The playground
Panel 3:
The train
Passenger 1: May I sit?
Max: Sorry, this seat is taken.
Panel 4:
Even School
Max: Psst, what's the answer to number three?
Panel 5:
One day, Max came home...
Max: I'll be right back, I just need to put more Justin Bieber on my Zune.
Panel 6:
Max: Mommy, What are you doing!
Mommy (that would be me): Can't talk, eating.
The End?
And...
when I'm not eating muffins, I am now on the design team for Crafting Jewish Style, AND Simply Scrapping Crafts!
Posted by Aliza at 4:02 PM 1 comment: 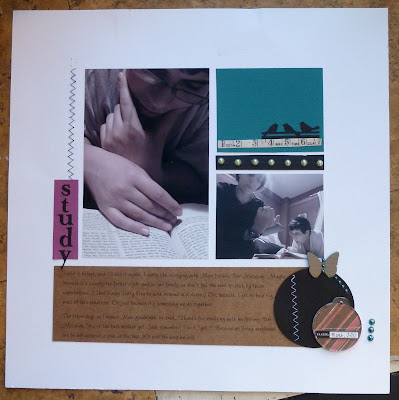 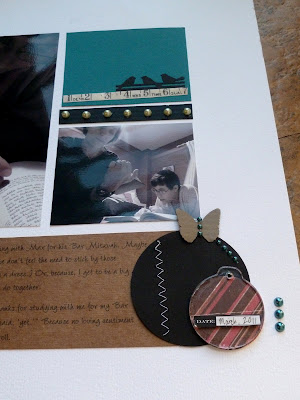 I will just start with the pictures this time, because I like 'em. I based it on this sketch over at Simply Scrapping Crafts. (More about them in the near future.)

It'a all about me helping Max study for his Bar Mitzvah Parsha, a role that I have enjoyed taking on. But while I'm at it, I will also rave for a moment about those cute little birds (Martha Stewart paper punch, again!), and my little stitching. I got this great new set of tools that pierces the paper for you, and now I get to add stitching to my layouts without a sewing machine. Hooray for me.

Welcome my precious.
What tools do you find yourself making eyes at?
Posted by Aliza at 10:39 PM No comments:

Well, it's back to work for me, after a nice week off for President's week, which means less time to craft and blog, but I am determined to keep doing it all, even if it makes me stressed, tired, and sometimes cranky. This week I worked on, among other things, creating this layout based on the latest sketch at Sketchabilities. 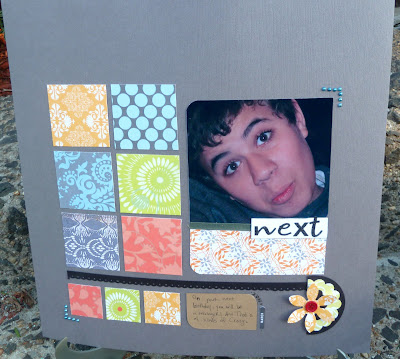 And, here's a little close up, because a) I like the way the camera catches the colors better, and b)it shows my tiny little journaling, which just expresses my utter amazement at the fact that Max will soon be a teenager. You'd think that at some point I'd get used to that, but so far, not so much. 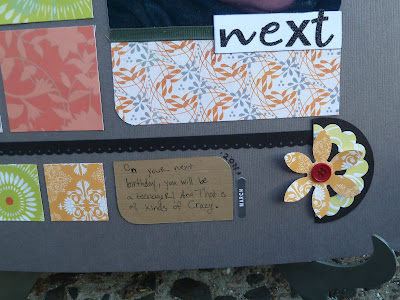 I actually went outside to take these photographs, because I missed the half hour or so that I get good light in my apartment. While I was out there, I took some pictures of some other layouts, too. Much better. 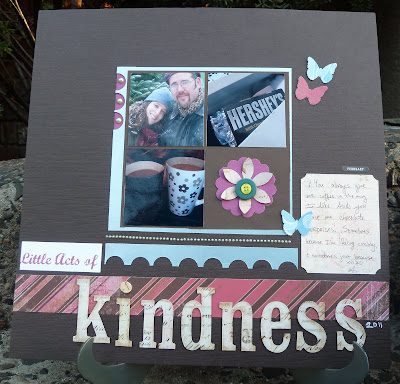 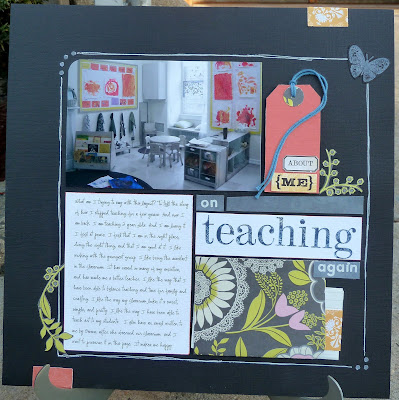 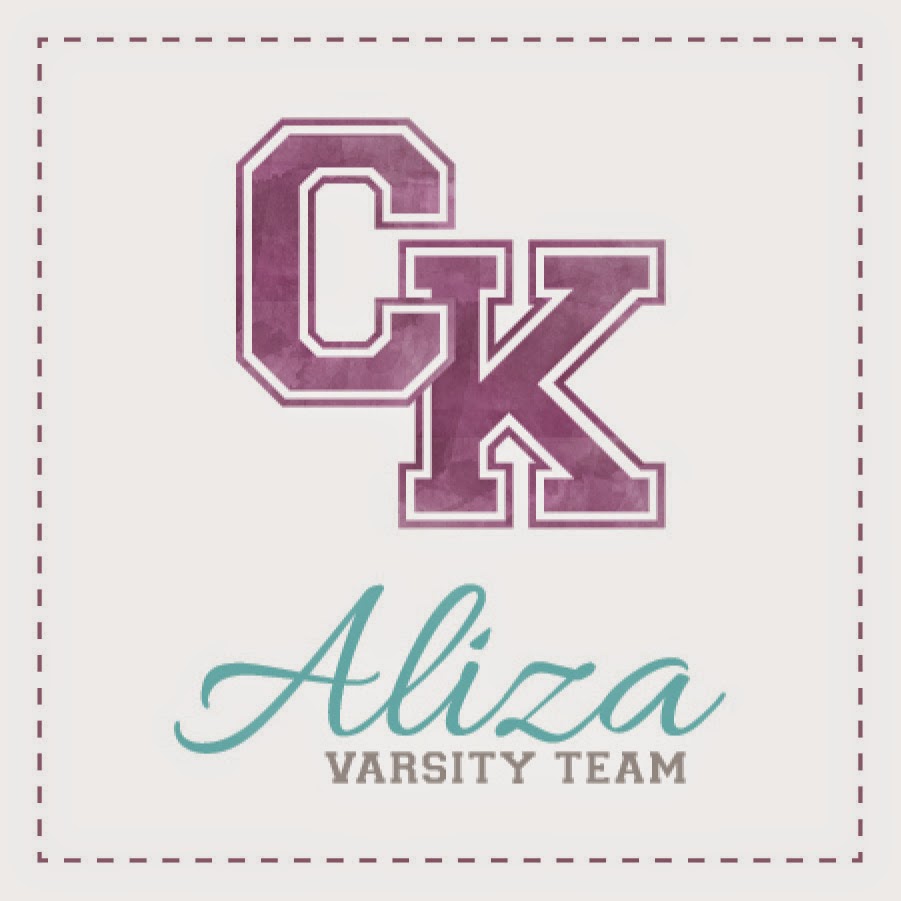 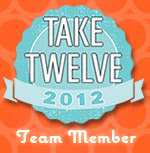